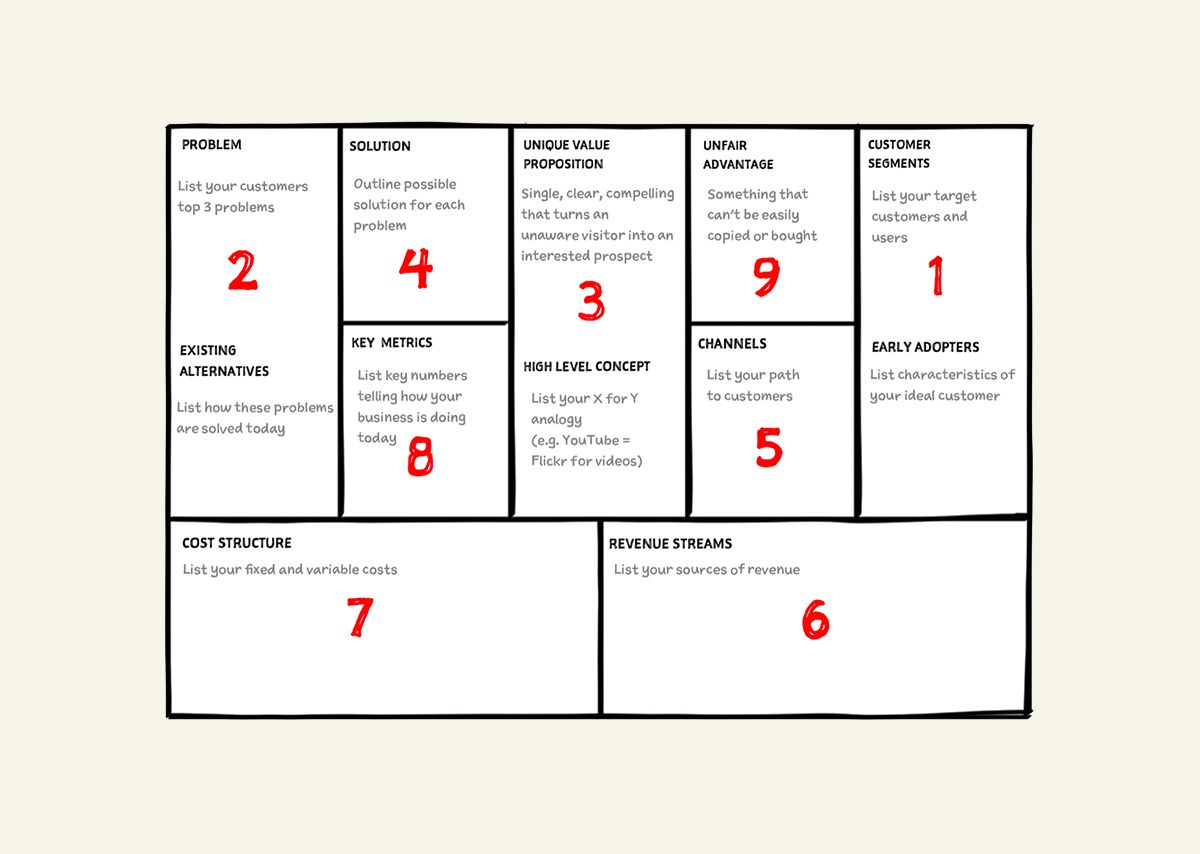 A question I get a lot is: Why isn’t the Lean Canvas laid out more logically? Anyone that has attempted to fill one can relate. You must jump around from box to box in seemingly random order.

The main reason for this particular layout was legacy. Lean Canvas was derived from the Business Model Canvas. And instead of changing the canvas layout, I chose to adopt a self-imposed design constraint: Every time I added a new box (like Problem), I’d remove an old box (like Key Partners).

To compensate for usability, I published a suggested fill order in my first book: Running Lean.

Over the years, however, I found myself tweaking this fill order for better flow. While starting with customers and problems was always the common thread, ordering the other boxes changed ever so slightly.

The original question then morphed into: Why is there a different suggested fill order across your books and the online app? Which is the right order?

After years of coaching and reviewing thousands of Lean Canvases, I have finally uncovered the right fill order, and I’m ready to reveal it.

Are you ready? Wait for it…

Good ideas can come from anywhere.

I made a short list of idea sources recently:

As you can see from this list, ideas (yes, even good ones) can come from anywhere. The best way to find a good idea is to have lots of them.

Idea generation doesn’t have to start with customers and problems.

However, the real challenge isn’t idea generation but idea validation.

While a fill order shouldn’t constrain idea generation, there is an optimal ideal validation order.

As with jigsaw puzzles, ideas can have many different starting points. Irrespective of where you start, you still need to end up with a picture that comes together (business model story).

The goal of sketching a Lean Canvas is deconstructing an idea so that you see it more clearly. While imposing a starting point (like customer and problems) was well-intentioned (because they tend to the riskier boxes), I found that too many people would often fake them anyway. They would write problem statements to justify a solution that they already wanted to build. And, in the process, they gave themselves a false sense of comfort.

Everything looks like a nail when you’ve already decided to build a hammer.

Yes, this is the Innovator’s Bias. The most amazing part is that people don’t even realize they are doing this. So now I take a different approach.

Before you can confront your Innovator’s Bias, you have to be able to see it.

Instead of imposing a specific order, I now direct people to fill out their canvas by starting with their idea backstory. These triggers reveal a lot about the situation, context, biases, and pitfalls that often also come along for the ride.

Here’s how I do this:

How to Deconstruct an Idea

1. Take a quick snapshot of an idea

The goal of a first Lean canvas isn’t achieving perfection but taking a snapshot. I recommend setting a timer for 20 minutes and filling out as many boxes as possible within that time limit. It’s okay to leave boxes blank.

Start with your idea's backstory. Even though your idea may have felt like a flash of inspiration, ideas can always be traced back to one or more specific events or triggers that caused you to take action.

The Uber founders, for instance, supposedly got the idea after they were unable to find a taxi after an event in Paris. They encountered a problem and decided to do something about it (scratch your itch). If I were sketching that canvas, I’d start with the problem box.

If you’re a researcher with a discovery or invention you’re commercializing, you’re starting with the solution box. You might as well make that explicit on the Lean Canvas.

If management asks you to find a new market revenue stream, make that your explicit starting constraint.

If you want to give it a go, you can get started with a blank Lean Canvas template at http://leancanvas.com.

2. Study your chain of beliefs

What were the first three boxes you filled? Where you start is quite telling.

What’s interesting to note here is that the seemingly random order of the Lean Canvas is a gift in disguise. Had the Lean Canvas been organized more logically, people might have been led to fill it in that order and miss following their own more natural thinking order.

Not surprisingly, the solution box often makes the top starting point for most ideas. Next in line are probably revenue/growth directives and exploiting a preexisting unfair advantage.

As you work through your chain of beliefs, categorize each one into these buckets:
- a leap of faith (gut instinct),
- an anecdotal observation, or
- a fact (based on empirical data).

This will help you see how grounded your idea is currently.

3. Reorder your chain of beliefs

The point of this exercise isn’t to fault your idea-generation method. Remember that “good ideas” can come from anywhere. But how you act on your idea is a much greater determinant of success than the source of the idea itself.

For an idea to succeed, it needs to simultaneously address three types of risks: customer, market, and technical. We can also show this as the intersection of IDEO’s three circles:

Ensure the starting links in your chain cover all three risks and are ideally grounded in factual data. If not, you know what to do next. Get some answers by running some learning experiments.

For most products, feasibility isn’t what’s riskiest but desirability, then viability. In other words, getting your customer’s attention is the first battle — more so today than ever.

To help you home in on your desirability story, I created a Lean(er) Canvas which lets you focus on this almost universal starting risk.

Read more about the Lean(er) Canvas. 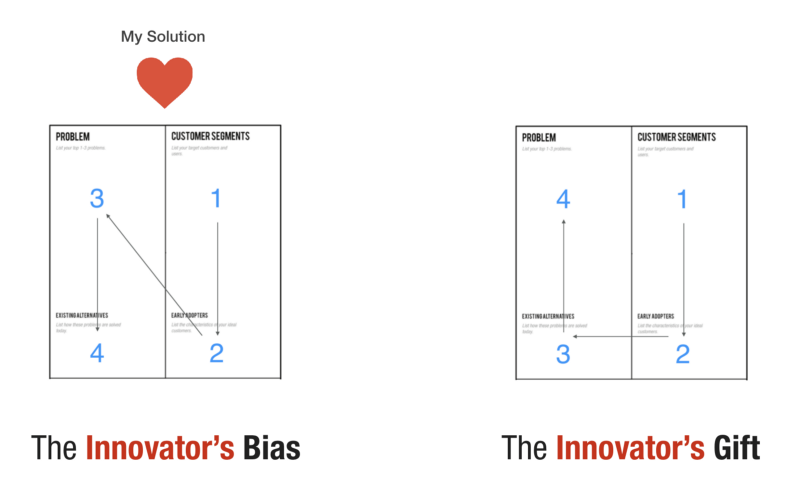 Reorder your Chain of Beliefs with a leaner Lean Canvas 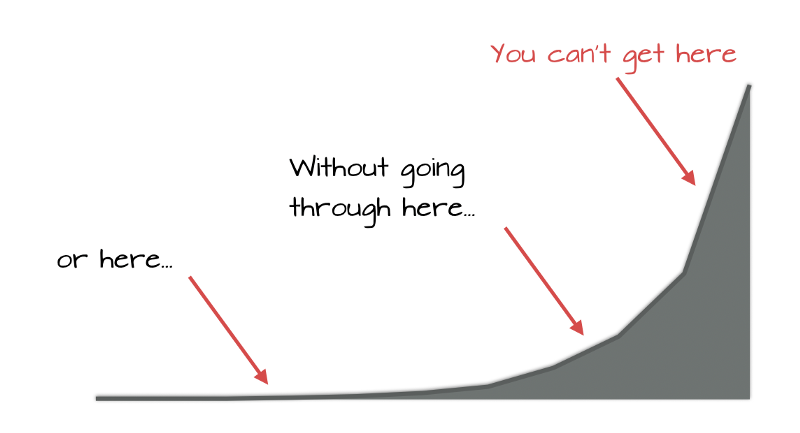 Give Yourself Permission to Scale 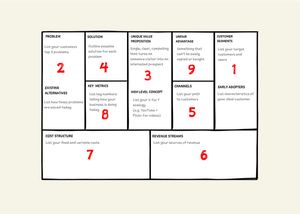 What is the Right Fill Order for a Lean Canvas? 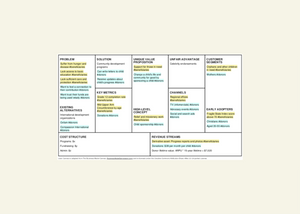